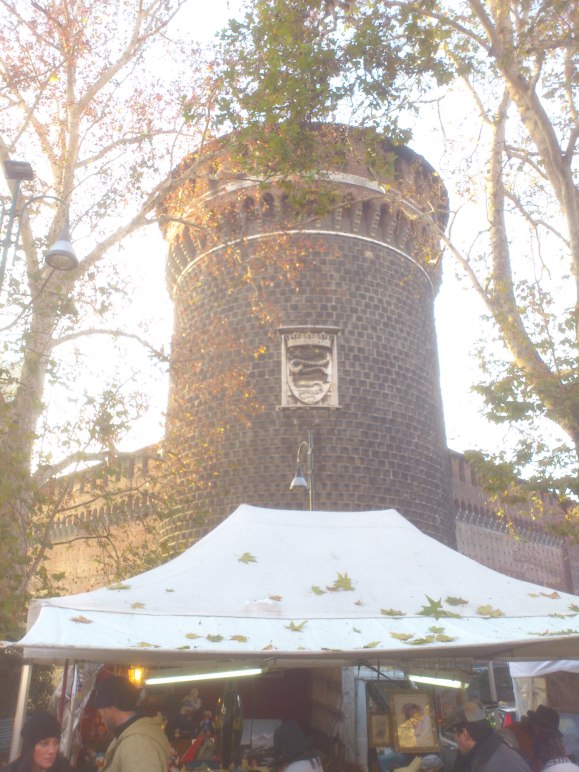 Oh bej! Oh bej! Fair is traditionally held in Milan on S. Ambrogio (7th of December) and on the following days; it is a sort of Christmas market, happening  since 2006 around Sforza Castle, while it was held before close to S. Ambrogio church. It can be very very crowded, at the point that you can hardly walk. Zanzana went for a walk there also this year, after discovering that her husband wanted to go in order to eat a sandwich with grilled sausage, typical lunch during this kind of events.

Zanzana wants to describe the right state of mind you need to have when going to this fair, quoting directly from the Wikipedia entry about it:

While celebrations devoted to Ambrose, in Milan, date back to the late 13th century, the actual Oh bej! Oh bej! fair is said to have been established in 1510, on the occasion of Giannetto Castiglione, delegate of Pope Pius IV, visiting Milan on 7 December.According to the legend, Giannetto wanted to ingratiate himself with the Milanese, and thus entered the city carrying boxes full of sweets and toys for the Milanese children. A cheerful crowd followed Giannetto to the Basilica of Sant’Ambrogio, and thereafter the fair was established to commemorate that day. The name “Oh bej! Oh bej!” is supposedly a reference to the cheerful cries of the Milanese children receiving presents from Giannetto.

Fiera degli Oh bej! Oh bej! became now as any other Christmas market, where you can find any kind of product, not always at reasonable prices. Moreover Milan offers today a lot of occasions to buy Christmas presents or genuine food, like Il Banco Di Garabombo (big Fair Trade Christmas market), or Popogusto (organic and local food market supported by Radio Popolare, Milan). In fact, Zanzana did not go there to buy something. She went there to have a walk in a nice spot of her city, crowded with families, having something simple to eat with her beloved one, and trying to look at things, at the fair and after it, with the same astonishment you could see in the eyes of the children, when Giannetto brought them presents…

View of the market around the castle